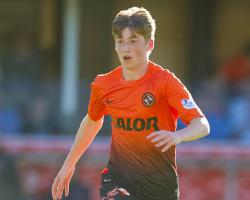 Dundee Utd 3-1 Kilmarnock: Match Report - view commentary, squad, and statistics of the game as it happened.United bounce backDundee United returned to winning ways in the Scottish Premiership as they saw off struggling Kilmarnock 3-1 at Tannadice to stay third top in the table.Jackie McNamara's side made up for their 1-0 defeat away to Motherwell before the international break by overcoming Allan Johnston's side thanks to goals in the first half from Nadir Ciftci and Stuart Armstrong, before substitute Aidan Connolly sealed matters in stoppage time.Manual Pascali equalised briefly for Killie in 38 minutes - but Armstrong put the hosts back ahead three minutes before the interval prior to Connolly's late strike, which subjected the visitors to their fourth straight defeat.The hosts took the lead in style in the sixth minute

Armstrong picked up possession and played a weighted pass into the path of Ciftci, who looked up before firing an unstoppable shot past low across goalkeeper Craig Samson and into the corner of the net from 16 yards.That was an ideal start for the home team, who soon set about looking for another goal to give them some breathing space.But Killie were not content to sit back and they threatened for the first time in the 13th minute.Josh Magennis played a cute flick forward for Robbie Muirhead to run onto as he advanced towards the home side's penalty area - but United defender Sean Dillon got across quickly to intercept as Muirhead was preparing to head towards goal.At the other end, Gary Mackay-Steven went on a driving run deep into the Killie penalty area

His cutback fell for Charlie Telfer, whose shot was in turn blocked by Kilmarnock's Mark Connolly inside the box.United's next effort on goal came in the shape of Mackay-Steven's 30-yard free-kick which Samson did well to tip over the bar.In the 34th minute, United had another chance when Erskine broke clear and fed Ciftci who was up in attack with him.Ciftci had only one thing on his mind when he surged forward but saw his shot go wide of the target from outside the penalty area.Killie then broke to the other end of the field, and from Alexei Eremenko's corner, Magennis won the header but it went straight at United goalkeeper Radoslaw Cierzniak.However, Killie equalised in the 38th minute against the run of play.Eremenko's defence-splitting pass found Rory McKenzie on the overlap and his shot came back off the post - but Pascali was on hand to steer home the rebound from just inside the penalty area.However, United regained the lead three minutes before the interval when Erskine lifted a pass into the path of Armstrong who steadied himself before placing a low shot into the far corner of Samson's net.Kilmarnock came close on the stroke of half-time through Muirhead's long-distance shot - but Cierzniak tipped it over the top.The second half started with Armstrong crossing for Ciftci in 47 minutes but from close-range Samson pulled off a great save.In the 53rd minute Telfer released Armstrong, who ran 50 yards before his shot was saved low down by Samson.United remained on top for most of the second half, although Killie's Ross Barbour saw a shot in the dying minutes deflected just wide of the target.But Connolly made it 3-1 in injury-time with a close-range finish from Blair Spittal's cross - after Armstrong had started the move