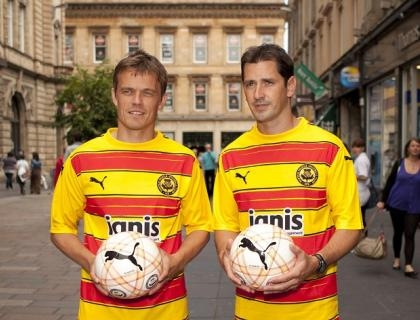 Russell keeps his cool from the spot

Dundee United claimed a share of the points after Johnny Russell netted a controversial late penalty in the 2-2 draw against Hibernian.

The Edinburgh club had looked set to hold on for the win when James McPake cancelled out John Rankin's early opener and Leigh Griffiths struck in the second half.

But United were celebrating late on when Russell kept his cool to convert from the spot, following complaints from angry Hibs players.

Both teams named an unchanged side for the Clydesdale Bank Premier League clash at Tannadice after picking up victories in their last outings.

It was the home side who were out of the traps quickly when they surged into the lead after just seven minutes.

Jorge Claros played a pass back to his goalkeeper but Ben Williams' attempted clearance clattered off the body of Rankin and into the back of the net instead.

Despite such an early set-back, Hibs responded well and Paul Cairney drew a decent save from Radoslaw Cierzniak with an angled drive.

Griffiths then unleashed from the edge of the box but his strike was straight at the United goalkeeper, who gratefully gathered.

At the other end, a powerful shot from Stuart Armstrong dipped just over the crossbar as the Tangerines attempted to add to their advantage.

But it was Hibs who had the net bulging when they hauled themselves back into the match with 27 minutes on the clock.

Tom Taiwo was tripped just outside the box out on the left by Keith Watson and Griffiths' free-kick sparked a scramble in the goal-mouth before McPake pounced to nod home.

The visitors were now in the ascendancy and a ferocious drive from Griffiths flew just over the crossbar and onto the top netting.

The Hibs forward then rattled the woodwork when he smashed a shot off the near post just before the break.

Griffiths had been a menace throughout the first half and he was rewarded for his efforts after 52 minutes.

The striker collected from Matt Done before bursting down the left flank and lashing an unstoppable 25-yard strike past the helpless Cierzniak.

United swapped Richie Ryan for Barry Douglas four minutes later and the substitute almost set up the leveller for the home side.

He flighted a free-kick into the box where Watson was waiting to connect with a bullet header that was just off target.

Rankin then went in search of his second of the day with an effort that glided just over, with United frustrated in their attempts to restore parity.

Griffiths, who appeared to be nursing a knock, made way for Eoin Doyle with 20 minutes to go.

United continued to press for a share of the points and a full-stretch Williams tipped just over to prevent Armstrong's header finding the target.

With time fast running out, Jon Daly sent a header over from six yards, but the honours went to Russell with four minutes to go.

Referee Alan Muir pointed to the spot for a Ryan McGivern challenge on Gary Mackay-Steven - despite suggestions the foul was outside the box - and Russell converted from 12 yards.