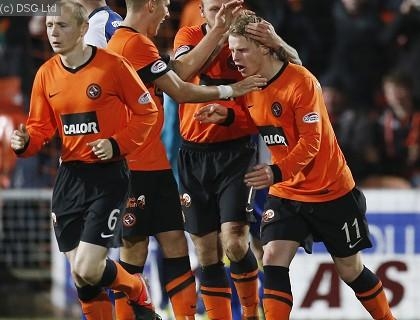 Motherwell recorded their third successive away victory in the Clydesdale Bank Premier League with a 2-1 success over Dundee United at Tannadice.

Michael Higdon capitalised on hesitancy amongst the home defence to fire the visitors ahead after seven minutes.

A wonderful 20-yard strike from Chris Humphrey doubled the Fir Park side's advantage three minutes later but Jon Daly netted his fifth goal of the season to reduce the deficit before half-time.

Motherwell survived a barrage of second-half pressure to clinch all three points.

Stuart McCall's side threatened in the opening minute as Shaun Hutchinson headed wide of the target from Tom Hateley's fizzing corner.

The hosts were handed a goalscoring chance of their own after Hutchinson clumsily bundled over Russell 20 yards from goal, however Barry Douglas could only direct a tame free-kick directly at Darren Randolph.

Motherwell opened the scoring after seven minutes when Humphrey's delivery evaded all in Tangerine and allowed Higdon to coolly slot the ball past Radoslaw Cierzniak.

Only three minutes later the visitors doubled their advantage in stunning style, Ojamaa did well to find Humphrey and the Jamaica international burst forward before unleashing a stunning right-footed effort that found the top corner.

It was clear the visitors were in the mood and Hateley fired over the top before Henrik Ojamma's low drive nestled in the side-netting.

Randolph was forced to tip Gavin Gunning's powerful free-kick over the crossbar as the home side attempted to find a way back into the match.

Motherwell continued to demonstrate a threat on the counter-attack and only a crucial intervention from Douglas prevented Higdon profiting from Murphy's dangerous cut-back.

Referee Bobby Madden waved play on just before the half-hour mark when Hateley appeared to foul Stuart Armstrong just inside the area - the home support were furious, but they did not have to wait long for their side to find a way back into the match.

Hutchinson was caught out by Sean Dillon's cross and Daly controlled the ball before slamming it into the net.

Hutchinson was the first player to receive a booking after a clumsy foul on Rudi Skacel.

An excellent piece of goalkeeping from Cierzniak denied Higdon from doubling his tally four minutes before the interval.

United began the second half in a positive fashion and Randolph had to be alert to divert John Rankin's shot over the top.

The Motherwell goal continued to live a charmed life and Daly failed to make contact with Russell's dangerous cross before Skacel somehow failed to find the target when the ball fell to him 10 yards from goal.

Daly's looping shot found the top of Randolph's goal before Rankin made way for Michael Gardyne with 18 minutes remaining.

Cierzniak produced an excellent finger-tip save to keep out Murphy's low shot, in what was Motherwell's first attempt of the second half.

McCall looked to bolster his midfield when he introduced Stuart Carswell in place of Ojamaa.

Tangerines boss Peter Houston was forced into a second change five minutes from time when Willo Flood limped off to be replaced with Richie Ryan.

The home supporters thought their side had ensured at least a share of the spoils when Skacel bundled home after Daly's cut-back, however he was denied by the offside flag.

Two minutes of added time brought further pressure from the home side but they were unable to breakthrough the stubborn Motherwell rearguard and as a result they are still awaiting a first home victory since August.