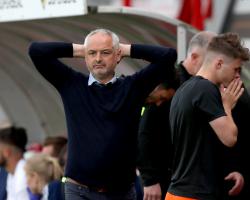 McKinnon's sacking had been widely reported since an emergency board meeting was held after Saturday's 2-0 home defeat by Inverness, but the club waited until Tuesday to make it official.

The club thanks Ray for his service and will now commence the search for a new manager."