There’s a song you know, it goes like this…

Get down on your knees and pray,

It's the day we won't forget,

And the Dundee will regret,

It's a day we gave them,

It was the 11th of September,

A day we all remember,

Finn Dossing was at centre and scored three,

Lennart Wing from the spot,

And Gillespie with a shot,

We were the unfancied side. Dundee had won the league only a few seasons before, and had recently played in the semi-finals of the European Cup. United, at that point in time, had never lifted a trophy, had never competed in European competition, and had always been considered the wee brother of the two Dundee clubs. The balance of success slowly changed over the following years, with United coming to the fore, but many cite this day, the 11th of September 1965, as the day that tide finally started to turn, and the spotlights and cameras would be pointing at Tannadice.

The team who lined up 40 years ago differs from the team shown in the programme, with Rooney replacing Mitchell. Finn Dossing got a hat trick, with Lennart Wing and Dennis Gillespie grabbing the others. 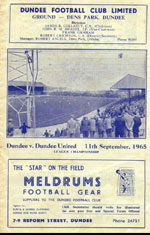 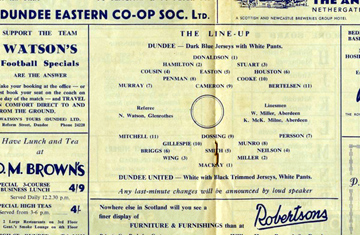 Two of the Headlines 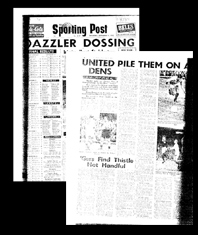 " McLean intelligently lobs to Cameron as the centre streaks down the middle. Mackay races out and Kenny lifts the ball over his head. It's a goal all the way until Mackay breaks the high-jump record and punches the ball into the air. As 'keeper and centre collapse in a heap, Briggs belts the ball clear". They don't write reports like that anymore!

“I was actually at the game and stood to the left of the Derry enclosure (left side facing the pitch that is - between the Derry and the goal). I was only 13 so don't have a lot of actual recollections, other than Finn Dossing! Must have been about that time that my mate Burnsie started singing the Finn Dossing song (to the tune of Poison Ivy). You're probably too young to remember. (edit – only just!!)

"I took my troubles down to Jerry Kerr

He said, I've got a striker that scores just fine

It has often been suggested that certain sections of the Dundee press have a tendency towards the very mildest hint of a dark blue bias, and if the following quotes, taken from the following Monday’s Evening Telegraph, are anything to go by, then you’d have to believe that the writer typed these words with a lump in his throat at his beloved Dark Blues’ humbling….

“ but despite this victory that was so much needed, United cannot ignore that forward deficiencies still remain”

“ it was sad to see Ken Cameron trying so hard but getting nowhere.”

“ United didn’t need to be any great shakes to achieve their biggest win over neighbours.”

One lesser known fact about the day, and a remarkable coincidence, is that the ‘Dens Park Massacre’ of 1965 was the debut, for Dundee, of Jim McLean. We all know that he went on to coach at Dundee, before being snubbed for the manager’s job there before applying, and getting the job at Tannadice, leading United to the glory days that would make up for many decades of being also-rans. The season turned into the best ever in United’s history up to then, finishing fifth in the top flight and qualifying for Europe.

Finn Dossing, the hat trick hero that day, would go on to amass 76 goals in 115 appearances for United, leaving after three years to return to Denmark. Lennart Wing returned to Sweden in 1967 to resume his previous job as a fire-fighter, whilst continuing to play for local club Orgryte, from where United had signed him. The other, non-scoring, Scandinavian that day, Orjan Persson, went to Rangers in 1967. Incidentally, Wing and Persson share the distinction of being United’s first internationals.


It's not often we look back at a single game that didn't decide a trophy, but the day we gave them 1-2-3-4-5 is a game worth celebrating, the day the wee team set out on the road to overtaking its neighbours.